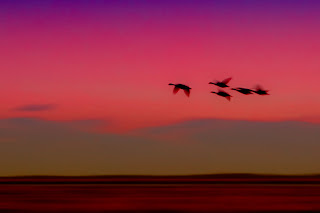 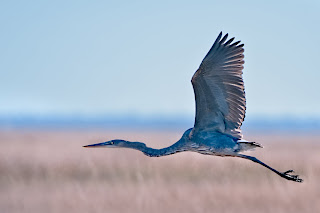 A glorious day at Edwin B Forsythe NWR (known to birders as Brigantine). Arrived 40 minutes before Sunrise, an ideal time. There was enough light for many interesting and colorful captures before the sunrise. Currently there are 1500 snow geese at the preserve. Their flight pattern is very sporadic, but when they take off in mass it's a feast for the camera and their roar and chatter is music to my ears. There was one major flight around 8AM, but instead of flying overhead to the fields, they moved their location in the preserve and I found them later, grazing. I spent at least an hour with an American Bittern. He was a great fisherman, but true to his breed he stayed mostly in the reeds.

My favorite images from the 12th are the dawn flight and the Great Blue Heron in Flight. I was reasonably close to the heron, used a 200-400VR lens with a 1.4 teleconverter, and was able to pan and get good details in the bird.